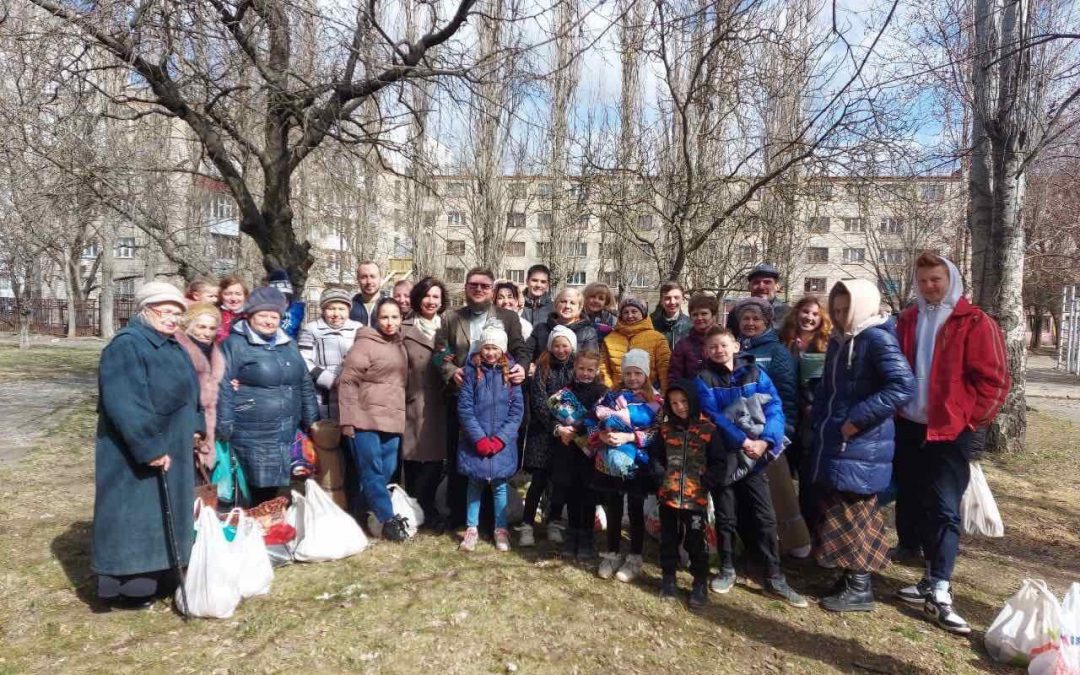 We want to provide another update regarding the war Ukraine and our brethren there.

Now entering its 8th week, the Russian army’s ongoing attack and occupation of Ukraine has resulted in the devastation of many areas, as well as personal loss, injury, humiliation, and painful deaths for many Ukrainian citizens. Thus far, over 20,000 Ukrainian civilians have perished due to the Russian invasion, and millions have fled the country or been displaced from their own communities; there are even reports of families and children having been forcibly repatriated to distant locales such as Siberia. Many people in heavily-sieged areas such as Mariupol have struggled to live without electricity, water, or food, and often die from thirst or hunger. Our CREC congregations and pastors continue to minister to those who are suffering and in need, including church members, residents, and refugees in their communities.

Amidst the atrocities and grievous war, the prevailing generosity and prayers of many have been of great encouragement to them and to us. We continue to give hearty thanks to God for kindling the spirits of so many churches and individuals, both within and outside our denomination, to give so liberally. Several recent inquiries and gifts have occurred simply due to word of mouth, or the sharing of the JEEP website, or the passing on of our newsletter. Recently I heard from a pastor of a community church in Nevada, who had received a JEEP newsletter from an unknown source. He told me their church has been praying for each of the Ukrainian pastors by name, and inquired about the best way to send funds to JEEP. Thank you to all of you who not only support and pray, but also have encouraged others to support and intercede for our Ukrainian pastors and churches as well as the JEEP Executive Committee.

As Mike Kloss shared recently, following the swift response to our request for help in purchasing two vans, within a week we reached our funding goal and were able to obtain the first van for Pastor Bogumil Jarmulak for transporting equipment, supplies, and people into and out of Ukraine. Regarding the other van, Pastor San Sanych Orlov-Koshchavka reported that Ukraine has recently relaxed its high tariffs on the import of vehicles from other countries. This timely providence will significantly lower the cost, and allow the purchase of one and possibly even two better vans from Poland or Hungary for the Rivne churches to use for relief and refugee work.

Along with our regular support to the pastors and projects in Eastern Europe, the JEEP Executive Committee is now sending monthly relief funds to the Ukrainian CREC churches, as well as to our churches in Poland and Hungary who are ministering to refugees in their communities. This past week, Pastor Jarmulak (with the new van) traveled to visit our brothers in west Ukraine, to bring a load of equipment and supplies, as well as financial aid for the churches there. Below is an update on the Ukrainian churches and their specific situations and needs, as well as some recent photos.

The Russian army retreated briefly from the Mykolaiv region, but has brought in fresh troops from Kherson for a renewed attack on the city. This weekend, Pastor Volodya Mykyta reported that the shelling and consequent destruction continues, and many have been wounded. He noted that “the coming weeks will be difficult for the whole of Ukraine, but especially in the east and south.” Two days ago, the bombing caused damage to Volodya’s house, as well as his car.

Around Easter, the Russian army destroyed Mykolaiv’s main water supply line. Thankfully, Volodya said that they have access to water filters they can use to produce clean water for now. To date, over one-third of Mykolaiv’s nearly 500,000 residents have fled. Volodya and his wife Victoria and daughter Lily have decided to stay in the city until the end, and continue to serve their church and the people of Mykolaiv. Although many of their members left, by God’s grace the church continues to worship, and has grown with over 20 new attendees. Volodya expressed deep gratitude in his email for our donations and their timeliness.

Dr. Dan Doolittle completed his medical work with a two capstone events in Rivne. First was the purchase and distribution of 2000 combat application tourniquets, underwritten by JEEP. Dan facilitated this with the help of his son Alden, who willingly made the transatlantic trip(s) to obtain the tourniquets and then deliver them to Rivne. Second, Dan helped lead a disaster drill at the main hospital in Rivne, with staged staff, patients, and trauma events, to determine readiness and identify gaps in emergency preparedness. The event was very well-received, and was even covered by ITV Media Group in Rivne. See the story at https://itvmg.com/news/ (Dan is featured 50 seconds in).

Dan’s work in engaging with local medical and military educators and administrators has been a great blessing to both the community and the church. The donation of the tourniquets along with the training Dan performed over the past weeks has opened the door for Pastor San Sanych to connect with key leaders in Rivne. Last week, San Sanych, along with other CREC pastors (Sasha P., Ihor L., Sergiy T., Volodya Y.), met with the governor of the whole Rivne region (“Oblast”) to discuss needs for supplies and support, and to pray with and for him.

Pastor Pawel Shevchuk, who had reported for duty last week, was allowed to return home due to a knee ailment that developed during training. While we are sorry to learn of Pawel’s knee issues, we are grateful for the Lord’s granting him leave from serving in harm’s way.

Pastor Volodya Yakubovsky this weekend shared some photos of deliveries that he made to numerous people in Pidhaichyky. Volodya continues to assist a local organization “Mission 823” in ministering to refugees, and St. Andrew’s Church (CREC) has grown considerably due to the recent migrations of many. Their rented space continues to serve as housing for refugees, and is converted to a worship space each Lord’s Day. The new Pidhaichyky church building is still under construction, with rising cost of materials the work has slowed. About $35,000 is needed to complete the project. Volodya’s job is at a standstill, and his salary has been cut by over 90%, so JEEP’s support has been critical for him and his family.

With most of the Nazareth House children having left the country, Pastors Ihor Lishchinski and San Sanych, Jr. are working in ministering to refugees or IDP’s (“Internally Displaced Persons”). Thousands from Eastern and Central Ukrainian cities now live temporarily in Ivano-Frankivsk, waiting for the war to end. Air raid sirens sound regularly, but thankfully the city has not seen direct shelling.

This past week one of Holy Trinity’s members, Anya Serdiuk, left Poland where she had fled since the war began, and traveled to the United States. For now Anya is staying in Oregon City with former Nazareth House aide Lauren Shearer, and will be attending Reformation Covenant Church. JEEP is assisting with her relocation expenses and support.

A recent report from Sasha Pavliuk was posted on the blog here.

Thank you for your gifts and prayers for our Ukrainian brothers, and your ongoing month-to-month support of our other churches and ministers in Eastern Europe. We are grateful for your exemplary obedience to the Lord, and the demonstration of your love for the body of Jesus. “For God is not unjust to forget your work and labor of love which you have shown toward His name, in that you have ministered to the saints, and do minister” (Heb. 6:10).

Please continue in prayer for these dear saints, and together with the apostles, we encourage you always to “remember the poor” (Gal. 2:10).

For the Executive Committee,