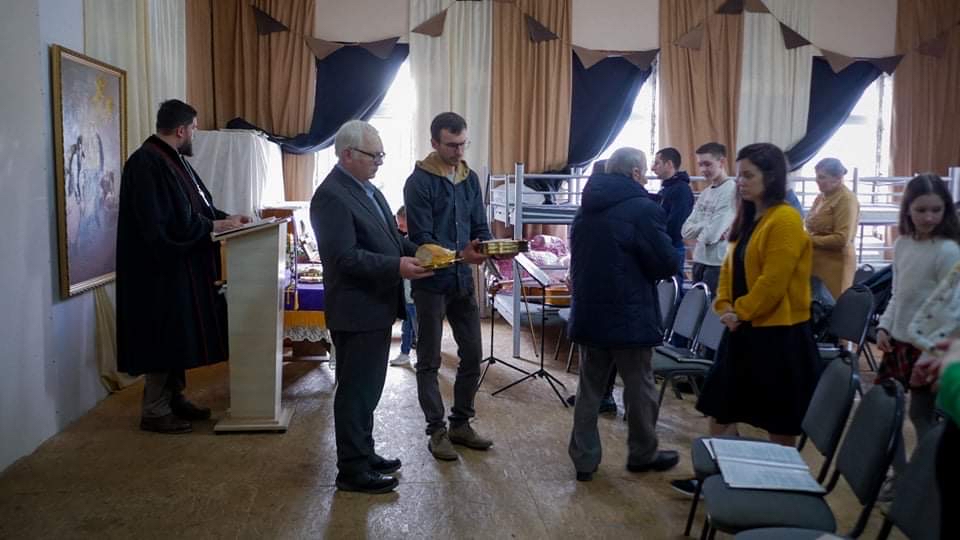 From John Unger, Chair of the JEEP Executive Committee:

I want to provide you an update on the Ukraine war crisis and its impact on our six sister CREC churches in Ukraine, as well as JEEP’s response the past 11 days since the Russian army invaded Ukraine on February 24.

Following our first letter, we have experienced a tremendous surge in inquiries for what can be done to help our Ukrainian brethren. I have fielded numerous requests from folks both within and outside the CREC, and the response has been frankly overwhelming. I want to personally extend my gratitude to Pastor Doug Wilson, who in his February 28 blog post addressed the Ukraine crisis and shared a link to our website. Over the past several days we have received donations and pledges exceeding our annual budget, and continue to disburse funds to the affected churches. Currency exchange fees have ballooned to nearly 20% in some areas, so having extra to send our churches there is meaningful.

We continue to be in regular contact with Hus Presiding Minister Pastor Bogumil Jarmulak as well as the Ukrainian pastors, keeping tabs on the churches and their needs, and will be disbursing more funds quickly as we determine when and where they are most needed. Following is a synopsis of each of the Ukrainian churches and their current situations.

Pastor Ihor Lischchinski and Deacon “Sasha” San Sanych, Jr. both have taken their families (wife and children) to Hungary, where Pastor Attila Haidju received them and has since been housing them, along with another family from Holy Trinity Church. Food and fuel prices in Ivano-Frankivsk have skyrocketed, and public transport has shut down. This past weekend, Pastor Jarmulak traveled to Ivano-Frankivsk, bringing around $2000 in supplies, food, and some fuel, as well as a good amount of USD cash.

Thousands of refugees are passing through Ivano-Frankivsk, which is roughly 150 miles from the Polish border. Some of the Nazaret House children have left, but many remain. Ihor, Sasha, and Roman are fielding many requests from other churches to help their people get to the border. In addition, they are laboring to obtain and offer food, shelter, transport, and encouragement to the children at Nazaret House, the saints at Holy Trinity, incoming refugees, and the surrounding community. They are also attempting to get various medical and other supplies into Ukraine, and are providing up-to-date intel to JEEP on the situation there.

Pastor Volodymyr Yakubovsky and the church at St. Andrew have turned their rented sanctuary space in Pidaichky into temporary living quarter for refugee families fleeing Kyiv and other war-torn areas. More than 30 evacuees gathered to worship with our Pidhaichky brethren this Lord’s Day. St. Andrew is also teaming up with another local mission there to assist the refugees. Volodymyr just lost his sales job in the HVAC industry as a result of the war, so JEEP’s support has been immediately helpful to him, as well as the church in their new refugee ministry.

Pastors San Sanych and Sergiy Terentyev are still in Rivne; Sergiy’s family has left Ukraine, but San Sanych’s wife Alla has remained with him. Several families from the Rivne churches have evacuated, some to Germany and some to Poznan, Poland where our sister church (ERC) is heping them. The Rivne airport was bombed last week, and public transport has ceased operating, making it difficult for San Sanych to get around locally to meet with and minister to their church members. San Sanych and Alla are hosting several refugees in their home. Sergiy Terentyev reported on Facebook that Svitlo school is no longer operating.

Remarkably, this past week ER physician Dan Doolittle from Carbondale flew to Warsaw where he met Pastor Bogumil to travel on with him to Ukraine. Today in Rivne, Dan met with the chief of the health department, who has organized meetings with the heads of the Rivne hospitals. Dan and San Sanych also met with an organization which is teaching medical personnel about battalion medical support, as well as the leadership of Rivne Medical Academy. Dan plans to stay in Ukraine for up to six weeks, providing medical care, and assistance and training to the physicians there.

Pastor Sasha Pavliuk and his wife and daughters are safe at present. Their son Mark, a recent military academy graduate, was assigned to the front lines at the start of the war; the Lord has preserved him from harm thus far. Sadly, however, Sasha reported that his nephew Anton was killed this past week in the battle near Kherson. Pray for Anton’s wife and their infant son, as they are now widow and orphan.

Sasha also reported that there are tens of thousands of refugees passing through their cities. Most are traveling with nothing, and need help getting to their destinations. In Khmelnytsky, Sasha is engaged in volunteer and chaplain work, and transporting loads of food and supplies to volunteers. The churches have set up places where people can sleep, get clothes and move on westward. To quote Sasha, “We are all very disappointed with NATO’s position, but our spirit continues to be strong. The Lord is doing something special now in our lives, it cannot be expressed in words… Thank your for your prayer and support.”

Pastor Volodya Mykyta alongside his wife and youngest daughter have spent several nights in a bomb shelter, last Lord’s Day they worshipped there. Though Viktoria has experienced some recent stress-related illness, they are safe, and their older daughter is presently secure in Odessa. Volodya lost his job as a result of the war, as have many in the region. Some of the fiercest fighting continues near Mykolaiv, as the Russian army is pushing west to reach Odessa and its coveted port access. The nearby city of Kherson was just overtaken by the Russians, but reportedly large protests by the residents have ensued and they are still resisting. Volodya Mykyta has been tirelessly ministering to and leading worship among all the folks in the underground shelter in Mykolaiv, while it has been under siege the past several days.

JEEP’s Response & How You Can Pray

Throughout this crisis JEEP’s desire is to be responsive, yet wise, measured, and effective. Our aim is to report regularly on our progress and administration of the funds donated, so that donors can be aware, pray, and feel confident in continuing their support. We are committed to being accountable for the funds offered, and transparent in their administration.

In your prayers, beseech the Lord for safety, courage, strength, faith, and steadfastness for the saints and pastors in Ukraine. There will almost certainly be more loss of life, and a consequent tragic increase in widows and orphans in their cities and churches. Pray also for Dan Doolittle, as he labors to assist with medical care and support. Pray for comfort and help for evacuees who are now in our churches, as well as grace and wisdom for our pastors who are ministering to them. The refugees who have escaped to our Ukrainian, Polish, and Hungarian churches are strangers: they have ostensibly left – and lost – everything, and many of those who have relocated will have limited ability to communicate. Pray for the Executive Committee, that we will have wisdom in directing and timely distributing the funds received. Finally pray for God’s judgment on the wicked, for the protection of His sheep, the turning back of the invaders, the end of this terrible war, and for restoration – and ultimately revival – to begin immediately.

We are grateful for the incredible outpouring of love and gifts we have received thus far; your generosity in Christ has exceeded our highest expectations (Eph. 3:20-21). Thank you for your willing engagement, prayers, support, and superabundant brotherly kindness. In all their communications to us, the Ukrainian pastors continue to express deep gratitude for the love and support they have received, not only from JEEP but also from the many individuals who have been in contact with them. It is making a difference, both in body and soul, to the pastors and saints there in Ukraine. We encourage you to continue to stay abreast of the war, and to find ways to connect with and bear the burdens of our Ukrainian brethren.